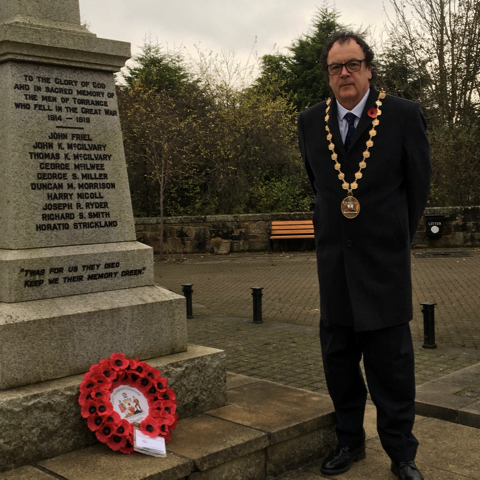 On behalf of the people of East Dunbartonshire, Provost Brown laid a wreath at Torrance War Memorial in private on Remembrance Sunday to pay tribute to those who made the ultimate sacrifice in the service of their country.

Across the area, Councillors also laid wreaths in an act of remembrance on behalf of East Dunbartonshire's communities:

This would normally have been done as part of organised events in partnership with local churches and community groups but given the unique circumstances this year, the Council wreaths were laid privately. You can see photos on the Provost's Gallery.

This was part of Provost Brown's determined efforts to make sure that, despite restrictions, fitting tributes were made.

Also, as part of those efforts, from Friday 6 November until today - Armistice Day itself - three Council buildings were lit up red in support of Poppy Scotland.

Over that period, Bearsden Community Hub, William Patrick Library in Kirkintilloch and Milngavie Town Hall stood as symbols of remembrance, hope and togetherness in this year like no other.

Provost Brown said, "Naturally things have to be different this year but our support for, and solidarity with, our armed forces remains strong and it was important that we demonstrated that as much as possible.

"I look forward to when we can revert to our time honoured tradition of gathering together to pay our respects to the fallen. We must never forget."