Since May 2017 East Dunbartonshire Council has had a minority administration made up of 7 Scottish National Party members. In December 2017, the SNP Administration resigned from office and in March 2018 a new Joint Administration was formed by the Conservatives and Liberal Democrats. 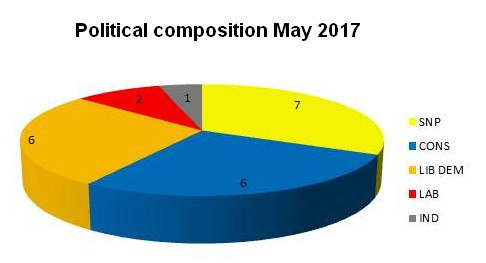 East Dunbartonshire Council has a majority coalition administration made up of Scottish Labour, Scottish Liberal Democrats and Scottish Conservatives.

On 13 September 2012, the Council held a By-election in Ward 4 - Campsie and Kirkintilloch North following the passing of Councillor Charles Kennedy in July.  The By-Election resulted in Gemma Welsh, Scottish Labour Party being elected as a Councillor for Ward 4.  As a result the existing majority coalition was increased by one to nine Labour members, three Liberal Democrats and two Conservatives. 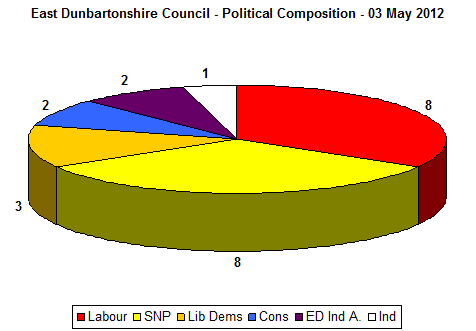 During 2009 East Dunbartonshire Council held two By-Elections following the death of former Provost Hannah (Lab) and the resignation of Councillor Hutchison (Cons). The results of the by-election changed the political composition of the Council with Councillors Moir (Lab) and Ghai (Lib Dem) being elected in June and December 2009, respectively.

Following the results of the Local Government Elections held on 3 May 2007, the Council now has the following parties represented on the Council. The details for each Ward are shown below including the STV election result for each ward: