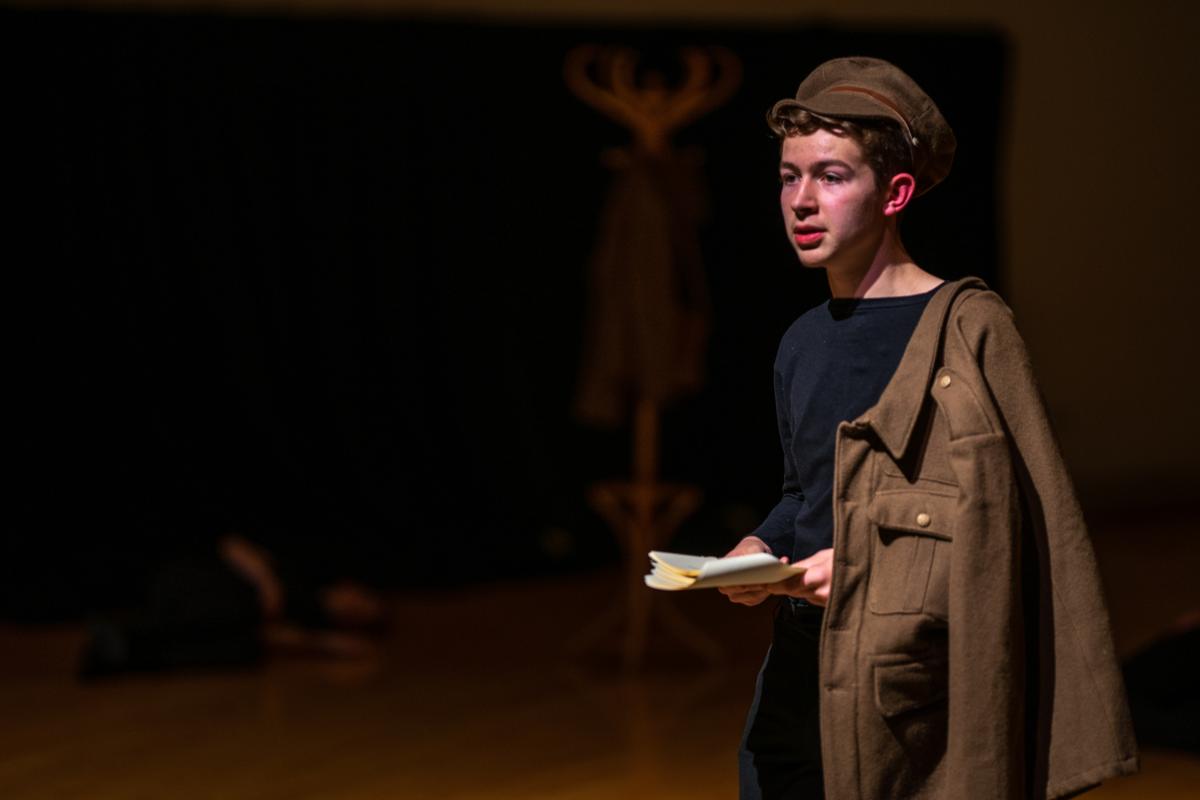 East Dunbartonshire Leisure and Culture Archives worked with the Scottish Council on Archives, with funding from the Heritage Lottery Fund, to undertake this innovative theatre education project.

Some 21 pupils from Turnbull High, Bishopbriggs, and 27 pupils from Boclair Academy, Bearsden, worked with two theatre education professionals, school staff and EDLC’s Archivist to create a drama based on letters and diaries written by soldiers and nurses from the local area. The students devised the dramatic scenes, and designed lighting and sound for the performances.

Amongst the archived material were letters written by brothers John, James and Craig Boyd, who lived in the family home at Woodside in Milngavie. The letters, which were carefully stored by the family, told stories of shrapnel wounds, the death of friends and being taken prisoner. At the end of the performance, it was revealed that all three brothers survived the war, lived in Milngavie into their 80s and died within six weeks of each other in 1976.

The archived material also included the diaries of two young nurses, Kate Jeffrey from Kirkintilloch and Elspeth Graham from Glasgow, which depicted their lives at the front lines. They spoke of the injuries and deaths that became everyday occurrences.

Over 140 parents, staff and guests from the local community watched the finished performances, which included accompanying musical pieces from pupils, at Turnbull High School on 8 November and at Boclair Academy on 19 November.

At the Boclair Academy performance, Teacher Catherine Conn remarked on how the students had given a voice to the personal experiences of nurses and soldiers during WWI. Eileen Kennedy, Head Teacher at Turnbull High School, was impressed by the impact the project had on the students involved, linking powerfully to their studies and raising their confidence.

Billy Hendry, Convenor of the Place, Neighbourhood and Corporate Assets committee at East Dunbartonshire Council, said, “The centenary of the end of the First World War has been marked in various ways across East Dunbartonshire this month, and these two performances were particularly special.

“The drama was devised in collaboration with the students performing it. The fact that the students are only a few years younger than the writers they were depicting renders these performances even more poignant.”

Sandy Marshall, chair of the EDLC, said, “Our archives are such a precious resource for local people and it is wonderful to see them being used in this way. The portrayal of the lives of these young people, told first hand through their letters home, brings a deeper understanding, for all generations, of the hardships endured during the Great War and the desperation felt by their loved ones left behind.

“We’re pleased that young people have had the opportunity to learn about the impact of the First World War and to share the lived experiences of local people with their communities.”

Lucy Casot, Head of Heritage Lottery Fund Scotland, said, “The impact of the First World War was far reaching, touching every corner of the UK. Since April 2010, the Heritage Lottery Fund has awarded over £70million to more than 1,300 projects – large and small - that are marking this global Centenary; with our small grants programme, we are enabling even more communities like those involved in Theatre of Remembrance to explore the continuing legacy of this conflict and help local young people in particular to broaden their understanding of how it has shaped our modern world.”