Love & Whisky tells the intoxicating tale of a pioneering partnership

A new exhibition distilling the true tale of a trailblazing couple - crowned the Mother and Father of Japanese Whisky - has been officially opened.

Love & Whisky - The Story of Rita Cowan and Masataka Taketsuru - is being hosted by the Auld Kirk Museum in Kirkintilloch until 14 March 2020.

Rita met Japanese student Masataka at her Kirkintilloch home in 1919. They married a century ago in Glasgow and crossed the world to create Nikka Whisky, one of Japan's most successful and best-known whisky companies.

Love & Whisky was officially opened on 22 February, with guests including Nozomu Takaoka (the Consul General of Japan in Edinburgh), Provost Alan Brown and Stuart McDonald, MP for Cumbernauld, Kilsyth and Kirkintilloch East.

Love & Whisky has been organised by acclaimed artist Mari Ito, with support from the Auld Kirk Museum and East Dunbartonshire Leisure and Culture (EDLC) Trust.

Mari said, "Thanks so much to everyone who came along to the official opening. It was a wonderful occasion and a fantastic way to toast the amazing true story of Rita and Masataka.

"I was very pleased to be able to organise the exhibition, celebrating a unique story which blends whisky, courage and enduring love. Thanks to everyone at the Auld Kirk and Trust for their support." 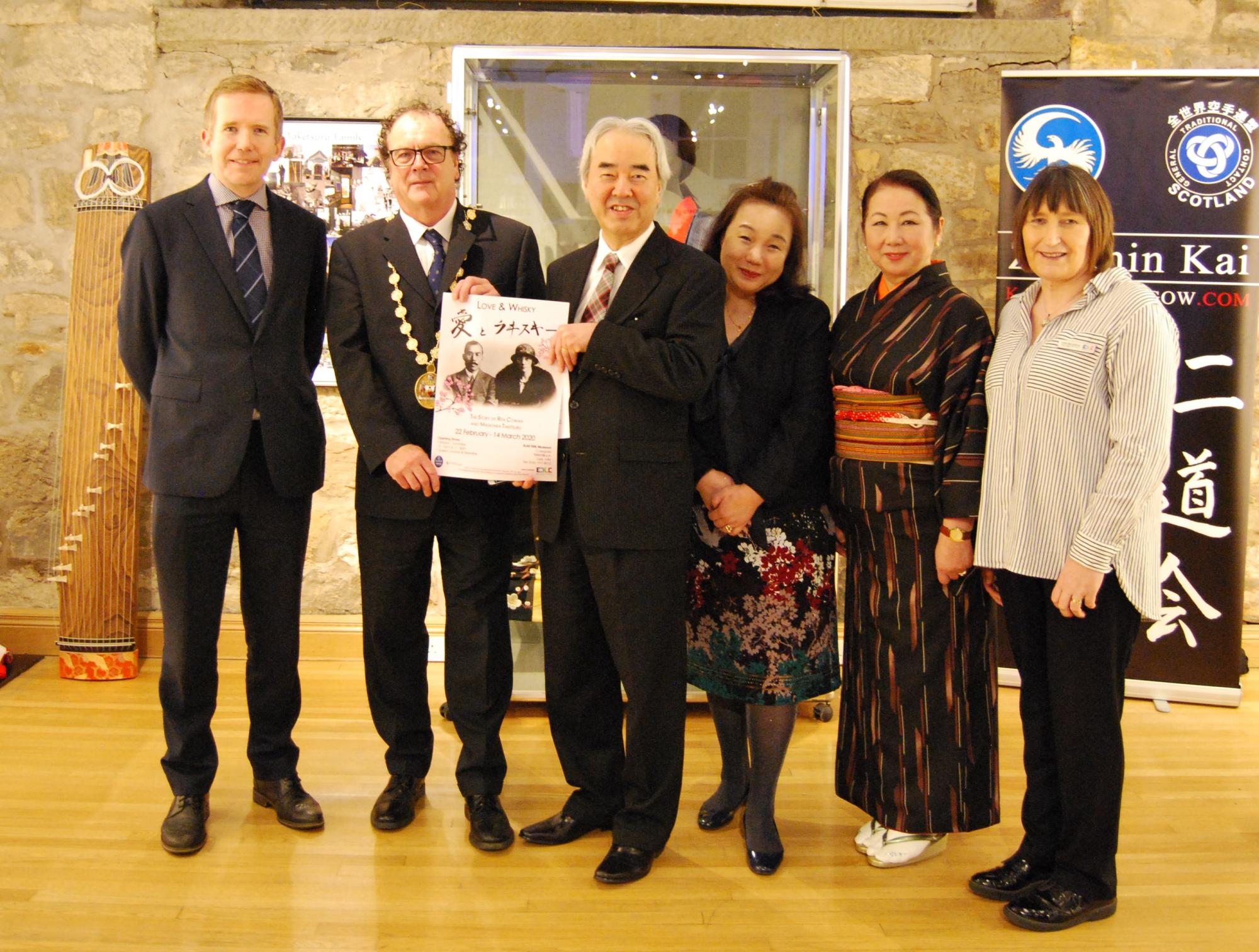 Provost Brown, who spoke at the event, added, "I was delighted to help open the new exhibition, Love & Whisky - celebrating the life and times of Rita and Masataka. It was a fantastic event - well done to Mari and all involved.

"Don't miss the chance to find out more about the couple's adventures, struggles and legacy before 14 March 2020."

Mari produces arts and jewellery using kimono fabric and tartan, as well as origami and other traditional Japanese methods.

The exhibition features a number of items - including one of Rita's beautiful kimonos - and artworks relating to her and Masataka's magical relationship ... and their spirited adventures together.

Rita - a former Lenzie Academy pupil, who became known as the 'Mother of Japanese Whisky' - remains a legend in her adopted homeland.

Councillor Vaughan Moody, Joint Leader of the Council and Chair of EDLC Trust, said, "The Trust works with the Council and a range of artists and organisations to provide packed programmes throughout the year - all of which aim to entertain, inform and inspire. I hope as many people as possible can make it along to the Auld Kirk before the exhibition ends."

* Love & Whisky is being hosted at the Auld Kirk Museum in Cowgate, Kirkintilloch until 14 March 2020. Museum opening times - Tuesday to Saturday, 10am-1pm and 2-5pm.

* There is a museum which honours Rita and Masataka's memory in Yoichi, Hokkaido - including a recreation of their living room - while their story was featured in a popular Japanese TV drama - entitled 'Massan' (Rita's nickname for Masataka). There are even reports of a Rita Taketsuru Fan Club!