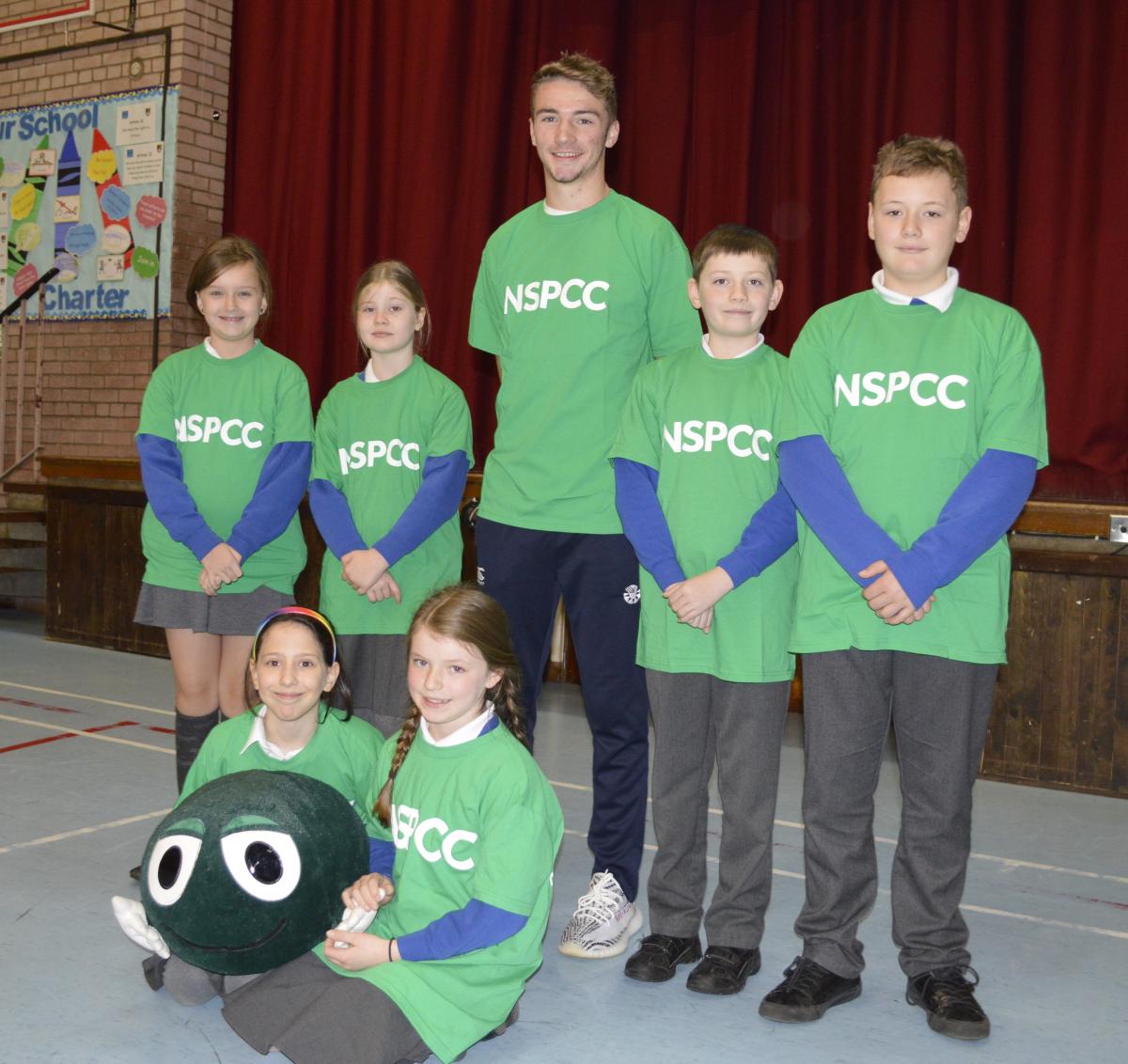 Rob, 21, from Milngavie, joined NSPCC volunteers at Castlehill Primary School in Bearsden to support the charity in its work to keep children safe from abuse and neglect.

The Speak Out Stay Safe assemblies, which the NSPCC runs in primary schools, help children to recognise different types of abuse and to feel confident about speaking out to a trusted adult.

Research from the leading children’s charity shows that on average at least two children in every primary school classroom across the UK will have suffered some form of abuse or neglect.

The hockey star, who scored against Australia in this year’s Gold Coast Commonwealth Games, said:  The NSPCC is a very important charity for protecting children and helping them to recognise abuse through the Speak Out Stay Safe programme. When I first heard about it I was really keen to get involved and offer my support.

“This vital service is helping to educate children on how to recognise the signs of abuse and that it’s ok for them to speak to a trusted adult about it – and I believe this is hugely important. Children need to know that someone will listen to them and that they have someone to talk to.

“I think bullying is something that is important to address, especially cyber bullying. I would tell any child being bullied that they are not at fault and to speak to someone they are comfortable being around if it is happening to them.”

NSPCC Scotland began the assemblies in Scotland in 2012 and since then its staff and team of dedicated volunteers have spoken to tens of thousands of school children the length and breadth of the country.

Speak Out Stay Safe helps ensure children understand what abuse is and know how to keep themselves safe. In 2017/2018 more than 146,000 primary school pupils across Scotland received the service in 918 schools. In the same year, 3,512 children were reached in 15 schools in the East Dunbartonshire area.

Councillor Jim Goodall, Convener of East Dunbartonshire's Education Committee, welcomed Rob and the NSPCC back to the area. He said, "The partnership between the Council and the NSPCC means these very important messages have reached many thousands of young people. The hope is that, armed with the right information and advice, they will feel able to speak out. Thanks to everyone involved in delivering this assembly."

Head Teacher of Castlehill Primary, Ms Kenney, said, "I am very grateful to the NSPCC for coming to the school to talk to the children to educate them about issues that can, sadly, affect their lives. It is so important that they learn, in an age-appropriate way, about the dangers they face in the real world and online and that they know they can tell if they are worried about something."

Rob added: “It was great to be able to talk to the children about the importance of being involved in sport and my journey to competing for Scotland at this year’s Commonwealth Games. Exercise is so important for mental health. I would also tell any young person wanting to get to the top level of sport to keep training and working hard, and you can achieve anything.”

Alan Stewart, NSPCC School Service manager for Scotland said: “The NSPCC’s Speak Out Stay Safe programme is such a vital service for young people and we are determined to make sure we can continue to bring it to every primary school in Scotland.

“It’s great to have Rob’s support, through his backing we are able to reinforce the messages encouraging children when necessary, to be brave and speak out to a trusted adult or Childline about a concern or worry that they may have.”